The State Visit, the highest form of engagement, in diplomatic protocol, that one country can have with another, will be the 3rd overseas State Visit since the President of Ireland took office and is recognition of the warm relationship Ireland enjoys with the People’s Republic of China encompassing all aspects of the exchanges between Ireland and China in culture, education, trade and investment.

The President’s programme in China, which officially commences in Beijing on Sunday 7th December, will include State ceremonies, cultural, educational and business events, such as an Irish Cultural Performance in Beijing‘s Forbidden City Concert Hall, and Enterprise Ireland / IDA Ireland business and Embassy of Ireland Irish community receptions. A state dinner in his honour, hosted by the President Xi Jinping and Madame Ping will be held on Tuesday 19th December. On Thursday, 11th December, the Consul General of Ireland in Shanghai will host a reception for the Irish community, while on Friday 12th the President will visit the third city involved in the State Visit, Hangzhou. In Hangzhou, President Higgins will visit Alibaba, and have a meeting with Mr. Jack Ma its founder and Executive Chairman. Staying overnight in Hangzhou – perhaps at the West Lake State Guest House where Nixon and Mao signed the historic “3 Joint Communiques” in 1972– on Saturday he will visit the Lingyin Temple in Hangzhou, which dates back to 328AD, take a Bronze Dragon Boat trip on Hangzhou’s spectacular West Lake, followed by a visit to a Longjing Tea Plantation before returning to Shanghai by bullet train. President Higgins will return to Ireland on Monday, 15th of December.

The importance of high-level diplomatic visits between the Ireland and China, which are helping to widen and deepen bilateral relations, cannot be overstated, and in our opinion a substantial trade spin-off can be expected to follow this major State Visit. Real potential exists for further enhancing the relationship between Ireland and China in Ireland’s niche industry sectors such as energy and green technologies, food and agriculture, financial services and aviation leasing, pharmaceuticals, medical devices, educational services, and tourism.

During his momentous visit to China President Higgins can be expected to emphasise the importance of trade links, and, more importantly from a Chinese perspective, growing mutual trust, while encouraging even greater economic co-operation between China and Ireland. 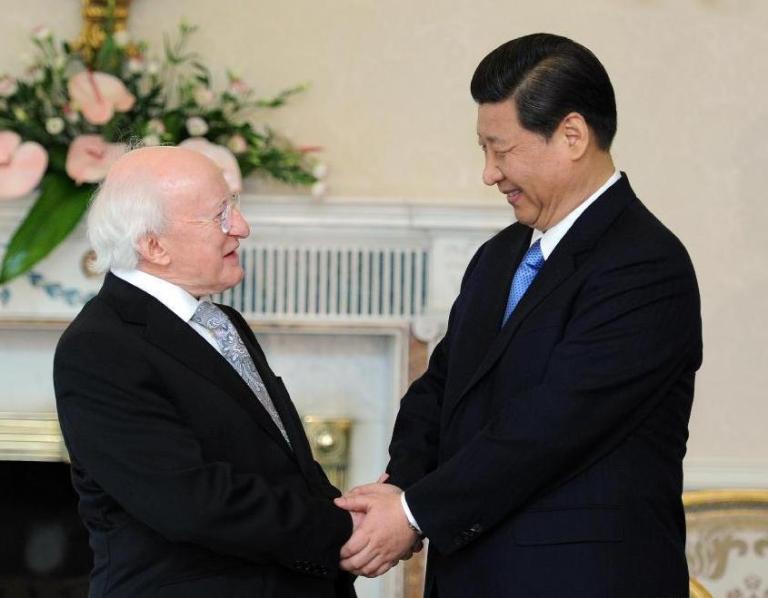 While there is considerable optimism in Ireland’s agri-food sector about Ireland having the potential to resolve problems of food security in China, New Zealand’s and, most recently, Australia’s free trade agreements with China serve to highlight the daunting task Ireland dairy and meat producers face gaining traction in such an intensely competitive market. As Mark Twain observed “To get the right word in the right place is a rare achievement”. However, one point President Higgins is very good at is talking up Ireland and he will have separate official meetings at the Great Hall of the People with President Xi Jinping, Prime Minister, Mr Li Keqiang and the Chairman of the National People’s Congress, Mr Zhang Dejiang, the three most powerful people in China.

As noted in an earlier Accurate China Insight http://www.accuratelimited.com/blog.view.php?id=2Mic2J2sUyQ=

“both countries enjoy an excellent political, business and cultural relationship, much to the envy of Ireland’s European partners”.

Firstly, China’s political leaders are clearly impressed by Ireland’s ongoing economic renewal brought about by the country’s strict adherence to fulfilling its commitments as an international Monetary Fund (IMF) country programme country, as recognized by the IMF, the European Central Bank (ECB), and the European Commission. From an export dependency perspective, China has a vested interest in the European Union’s rapid return to growth and in this context Ireland is a shining beacon of light.

Secondly, such positive awareness dovetails with the ‘Irish Model’ that has proved so successful in the development of China’s own special economic zones areas. In Chinese political circles, whether we realise it or not, Ireland has made an important contribution to China’s economic development. In 1980, a visit by former Chinese President Jiang Zemin, then Senior Vice Minister of State Imports and Exports Administration, to the ‘Shannon Free Zone’ (the world’s first free trade zone) paved the way for Chinese companies to import goods into a special economic zone, manufacture or reconfigure the goods, and then export them without intervention of the customs authorities. The resulting export-led growth has delivered an economy that has experienced the fastest expansion in GDP per capita of any major economy in human history. In recent times after years of economic expansion China’s economic growth rate has being losing speed, in part due to a decline in demand for its exports from key markets. To stall the slowdown new economic prototypes are being assessed such as the fledgling Shanghai Free-Trade Zone that bears characteristics that can be traced back to the ‘Shannon-Free Zone’. The February 2012 visit to the Shannon Development Zone by President Xi Jinping, then Vice President of China, was no mere happenstance.

Thirdly, Ireland currently enjoys a unique position in Europe between two of China’s traditional rivals, the USA and the UK, which for China represents a “soft power” relationship it is determined to make the most of over the long-term.

Fourthly, in addition that Ireland is the only English speaking country in the Euro zone enjoying tariff and border free trade across the European Union makes for a useful entry point into the European market of 500 millions. However, from this perspective Ireland has yet to notch up any significant Chinese investments, a point that President Higgins will no doubt be highlighting during his meetings with China’s political elites.

During the second week of December Ireland will take centre stage in China like never before.